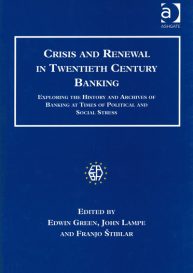 Crisis and Renewal in Twentieth Century Banking explores the behaviour of banks at times of war, revolution, civil war, social turmoil, and reconstruction. Analysing the history and archives of banks, it discovers examples of how banking is affected by political and social upheavals; how banks may influence the outcome of such events; how banking has recovered from periods of intense political and social stress; and how the archives of banks provide remarkable testimony to events in the wider world. By examining the setting of different banking markets in the last century, up to and including the transformation of Eastern and South Eastern Europe in the 1990s, this book marks a new direction for international discussion and research.