Banking, Commerce and Investment in the Ottoman Empire 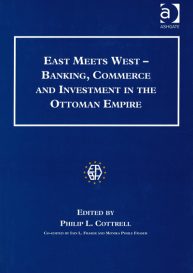 This volume offers a consideration from a number of perspectives of the principal forces that further integrated the Ottoman Empire and Western Europe during the first century of industrialisation. The essays not only review and analyse the commercial, financial and monetary factors, negative as well as positive, that bore upon the region’s initial stages of modern transformation, but also provide a ready introduction to major aspects the economy and society of the Ottoman Empire in the nineteenth century. The outcome is a broad ranging consideration of how all these issues played a fundamental role in the final decades of the Ottoman Empire and the emergence of Turkey as a modern state with links to both east and west.