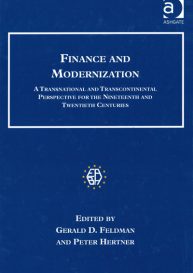 ‘Finance and Modernization’ centres on a set of historical developments and problems typified by the long history of the Oesterreichische Creditanstalt and its successor organizations, and opens the way to compare and contrast experiences throughout Central and Western Europe and also on other continents. The structure of this volume reflects the changing role and nature of banks as economies become industrialized and modernized. Although banks adapt to the needs of an industrializing economy, at the same time, industrialization influences the manner in which banking systems grow and the structures which they adopt.