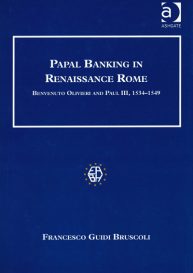 Benvenuto Olivieri was a Florentine banker active in Rome during the first half of the sixteenthcentury. A self made man without any great family patrimony, he rose to prominence during the pontificate of Pope Paul III, becoming involved with a variety of papal enterprises which allowed him to get to the heart of the mechanisms governing the papal finances. Amassing a considerable fortune along the way, Olivieri soon built himself a role as co-ordinator of the appalti (revenue farms) and became one of the most powerful players in the complex network that connected bankers and the papal revenue. This book explores the indissoluble link that had developed between the papacy and bankers, illuminating how the Apostolic Chamber, increasingly in need of money, could not meet its debts, without farming out the rights to future income.