State and Financial Systems in Europe and the USA 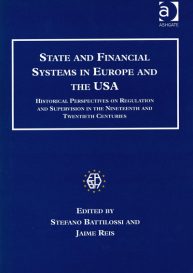 During the twentieth century the financial sector became possibly the most regulated area of the economy in many advanced and developing countries. The interwar years represented the defining moment for the escalation of governments’ intervention, turning the State into the core of financial systems in its capacity of regulator, supervisor or owner. The essays in this collection shed light on different aspects of the experience of financial regulation, ownership and deregulation in Europe and the USA from a secular historical perspective. The volume’s chapters explore how the political economy of finance changed in the nineteenth and twentieth centuries and how such changes were related to shifting attitudes towards globalization. They also investigate how regulation responded to governance problems of financial intermediaries and markets, and how different legal frameworks and institutional architectures influenced such response.