The Evolution of Financial Institutions and Markets in Twentieth Century Europe 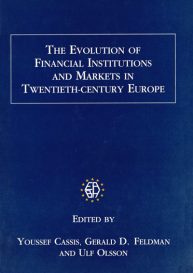 The 1980es witnessed widespread deregulation in major international financial centres and an increased globalization of financial activities. This was one of the first books to place in its historical perspective the question of the relationship between finance and the real economy. A wide range of institutions and markets is covered, including central, commercial, savings and investment banks, stock markets and other capital markets. The book will appeal to economic historians as well as to economists and financial analysts.