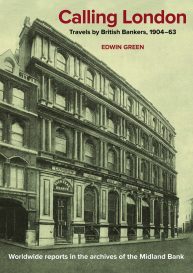 Reports from centres of finance across the world set in historical context.

From 1904 to the 1960s managers of the Midland Bank travelled the world, especially Europe and the Americas. They visited centres of government, finance and industry and then reported back to London. They often arrived, by chance or intention, at crucial moments in history such as Russia in 1909 and 1929, Austria in 1931, Germany in 1933, France in 1944, China and Japan in 1948 and member countries of the Common Market in the early 1960s.

In an original and illuminating account, Edwin Green sets this rich archive in its historical context. While Calling London throws light on international conditions in some serious times, it also provides insights into the outlook of bankers on the world stage.

For enquiries and purchases www.threadgoldpress.com